Gran Canaria is known for its white sandy beaches and perfect blue skies. But if you are interested in virtual production, there is another reason why this island paradise should stay on your radar: Televisión Canaria and its technical artist Fernando Trueba Llano, whose realistic-looking AR coverage of a volcano eruption glued thousands of people to their TV screen.

In our brand new blog series, we're showcasing the work of talented artists who are using Pixotope. This week, we are shining the spotlight on Spanish 3D artist Fernando Trueba Llano. 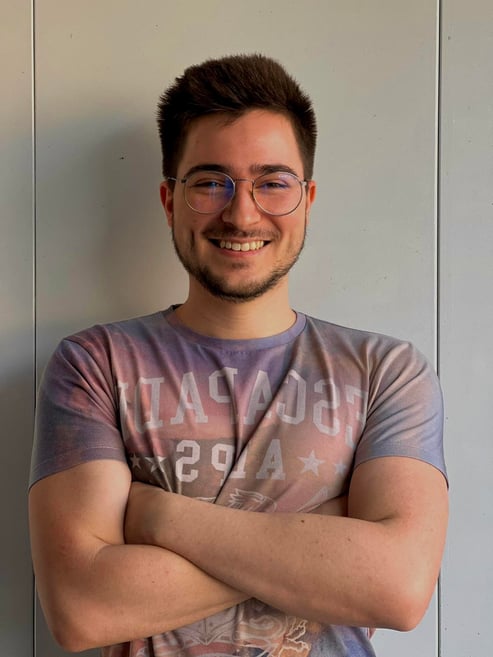 Everything started with a love for 3D

Fernando’s journey to virtual production may have started only six years ago, but he has been interested in TV and movie production for as long as he can remember.

“I was amazed by TV shows and movies that implemented 3D in such a dynamic, and sometimes even imperceptible, way to make physically impossible things come to life digitally,” he says. The first movie he remembers seeing in the theater was Godzilla in 1998. “That movie had a big impact on me. I still remember the sensations I was left with, despite it being many years ago. Then, of course, I remember the Jurassic Park movies, Star Wars, and even Avatar. Regarding TV, without a doubt, the Weather Channel has been an inspiration for me.”

From that point, it was clear what his next step should be: taking a vocation degree in 3D Animation focused on interactive environments and video games. This is where Fernando gained a basic knowledge of 3D and video games and became familiar with the real-time renderers Unity and Unreal Engine.

After getting an expert degree in Virtual, Augmented, and Mixed Reality, he realized the tools used in the video game industry were nearly identical to those being used to produce virtual productions (VP). That opened doors to a whole new world of possibilities.

“I became passionate about virtual production, so I decided to specialize in the field and started to explore this area and learn it by myself.” His passion for VP brought him onto a path of freelancing technical artist.

“One of the first jobs using Unreal Engine for VP was to set up a photocall using a chroma key. This involved wearing a motion capture suit (Xsens) and a green suit. I was controlling different video game characters and posing with people entering the photocall, so it looked like lots of people were posing with their favorite characters. It was a lot of fun!” His VP experience ultimately led him to VideoReport Canarias, where Fernando is now working as a technical artist on ‘Una Hora Menos’, a live primetime show that uses augmented reality to educate audiences on science and the environment.

“My main responsibility is to successfully develop ideas and act as a bridge between the 3D software and Unreal Engine/Pixotope. Everything that my colleagues develop in 3D needs to be transferred to Pixotope. This is where the need to optimize geometry and textures comes in. Since everything is live, we need all elements to work properly at 50 frames per second.” He also takes care of the animation, virtual cameras, and logic blueprints to maintain the needs of the production team.

Little time and a lot of pressure

The major challenge when working with virtual production is that everything is live — so there is no room for mistakes. Another challenge includes maintaining a live virtual set every day as the primetime show ‘Una Hora Menos’ runs daily between Mondays and Fridays. This means a lot of content needs to be produced in a short time. How short, you may ask?

“We are a small team and produce a two-minute piece almost every day with different environments, animations, and storytelling.” To gain more time to focus on content production rather than technical aspects, Fernando experimented with different tools. “Having tried several methods to make productions of this caliber with Unreal Engine, I can say that Pixotope makes many aspects easier and saves you from the need to have a large team of engineers to develop some mandatory tools.”

Not even a heavy workload could deter him from staying in love with virtual production. “What excites me the most is that you always learn something new that you can apply in your work, and luckily the engine continues to evolve and offer new tools and methods. I enjoy making animations with our talent where I can create impressive and also educational storytelling for the viewers,” he says. “My dream would be to work on a production of the caliber of The Mandalorian with big LED screens, or maybe a show where motion and facial capture are used on the talents.”

Pushing the envelope on graphic journalism

When a volcano erupted on the island of La Palma and 1,100 degrees Celsius hot flowing lava started to destroy everything in its path, a team from Videoreport Canarias decided to show the TV audience what happens when the lava comes into contact with cold water. Using VP, the team was able to convincingly depict what that tremendous event was like.

“From the very first moment, we were covering the eruption with 3D informative pieces, soaking up information from scientists and volcanologists,” Fernando explains “We kept the whole archipelago informed about what was happening on the island of La Palma for more than two months and I am very proud of what we have achieved.”

The months of hard work from Fernando and his dedicated team ultimately paid off. The realistic-looking graphics of lava reaching the sea helped raise international awareness of the impact of the disaster and earned TV Canarias global praise for pushing the boundaries of graphic journalism.

Virtual Production is not a science, it’s a craft

To keep up to date on virtual production trends and stay on top of the game, it is important to stay curious and continue exploring. Even as an experienced technical artist, Fernando does not rest on his laurels and continues taking courses to sharpen his virtual production skills. “The last one I attended was ‘Summer of Unreal’, focused on Unreal Engine's real-time animation workflows.”

If you are looking to start learning with virtual production but don’t know where to start, Fernando has a few tips up his sleeve for you: “My recommendation would be to start studying the basics of 3D and focus on Unreal Engine,” says Fernando. “Dedicate personal time to dig in and learn as much as possible. For example, right now I'm focusing on learning the new tools of Unreal Engine 5 and making environments with the help of Quixe. And finally, put into practice what you have learned and create demos of your capabilities with the engine.”