The Thrill of The Unexpected at IBC 2022

In the UK, the sad news of the passing of Queen Elizabeth II has only been challenged by coverage of “The Queue”. Similarly, much of the chatter in the weeks since IBC has been around the - frankly not much shorter - queue at Schiphol airport. So much so that you’d be forgiven for missing the significance of the show days that went before that.

The rush of in-person events in 2022 prior to IBC after two or three years of absence did little to quash the pent-up demand for a big M&E “meet-up” and while official figures show a drop in attendance of around 30% from 2019, there was a greater level of energy and “freshness” and, what I’d guess was the highest proportion of IBC “first timers” for many decades.

Regardless of which camp you look at (IBC newbies or IBC veterans), there was a distinct impression that attendees were open to new possibilities at IBC2022. In contrast to 2019, people are ready to adopt virtual production because there’s no question that it works. Thanks to artists and technical creatives around the world, it’s easy to visualize what virtual production is capable of. If we are speaking in terms of the technology adoption life cycle - we have departed the “innovators” phase and have entered the “early adopters” phase of the bell curve based on our conversations at the show.

Doing the Unexpected Pays Off

We couldn’t approach IBC2022 as we did IBC2019, least of all because Pixotope was a new company in 2019. As our business has matured over the last three years, so too has virtual production technology and its wider adoption in the M&E industry.

Equally, 2019 and 2022 exist in two very different realities. For that reason, we took an approach befitting of the mindset of show attendees and the new reality we’re in. 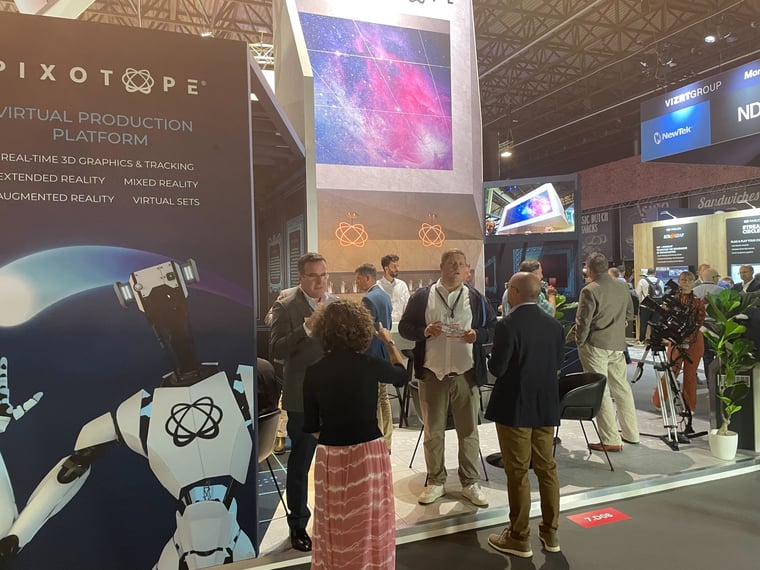 We created an inspiring space to have conversations on the show floor because virtual production is inspiring. There’s a great importance in creating a comfortable space which inspires conversation and gives you new ideas. We also placed particular emphasis on “changing perspectives” even using that phrase as the theme for the booth. It worked in two ways: figuratively as it relates to virtual production technology and workflows and literally with forced perspective artistic experiences on the booth. Part of our inspiration for the booth included getting creative with nods to virtual production and future-looking technologies. For example, you’d have to know that the pattern that appears randomly on the floor is a design derived from camera tracking markers and that the painting in the pitch frames in the corridor was generated by AI with the name “pixotope” as the sole input.

It’s Not About Product Features - It’s About the Possibilities

While virtual production is no longer a science experiment and is proven to work, many still want to know “what can it actually do?” It’s one of those questions that’s met with a question: “What do you want it to do?” With that in mind, our conversations have moved away from “how can we convince?”  to “how can we inspire?”

Inspiration starts with accessibility which starts with smashing down the barriers to virtual production adoption and growth, the first of which is education. Virtual production requires a rewiring of workflow memory muscles to remap to new techniques and technology. There just aren’t enough creative problem solvers out there who are well-versed in virtual production technology and workflows. We’re working to build out the talent pipeline with the Pixotope Education Program with our education program partners but it’s not an overnight fix. With an increase in skill will come faster and wider adoption of the technology, which will usher in the “early majority” phase of the adoption curve.

Beyond having creative firepower, the technology needs to make it easier to capitalize on the possibilities promised. Solutions like our XR Edition offer much-needed features to streamline extended reality workflows, such as unique color match functionality, multi-input switching in software, LED mesh import and automatic alignment, and multi-wall support, among many others. But, beyond features, our technology enables productions to move away from bespoke solutions and proprietary hardware to an off-the-shelf product that streamlines setup while making it less expensive to realize the creative potential of XR.

Safe to say, a new spirit arrived for the return to the 2022 IBC Show. It’s been three years since the show drew the industry in the thousands to the RAI convention center in Amsterdam. The energy and excitement of those in attendance reflected the hiatus and created an environment that fostered connection and knowledge sharing.

A lot has changed in three years - the world, our industry, and our workflows have been completely turned upside down and that’s not necessarily a bad thing. Sometimes we are most inspired when we’re out of our comfort zone. We find ourselves in a strange new world full of creative possibilities and the open minds to match that potential.

Missed us at IBC2022? Chat with us anytime about our virtual production solutions and industry initiatives.