The Making of Dot

You may recognize this friendly face roaming around Pixotope’s social media, website, academy videos, and demos. Our beloved mascot, humanoid Dot - the product of four very talented CG artists - is not easily overlooked! In celebration of Dot’s third birthday, we thought it would be fitting to give this quirky character a proper introduction.

Behind every great Dot, there's a great team

Frank and Øystein are considered the “fathers” of this robotic character. Frank Vedvik, currently Creative Director of Norwegian media company MYREZE, was the main sketch artist who brainstormed and doodled ideas for Dot’s design on paper, while Øystein Larsen, Chief Creative Officer at Pixotope, was there to support his team in the process. Øystein says:

“It is like every single design project internally: we always have to collaborate to create a meaningful design. When it came to my involvement, I was there to supervise and oversee the general process, finding Dot’s character through design, modeling, texturing, rigging, animation, and deciding which details to include.” 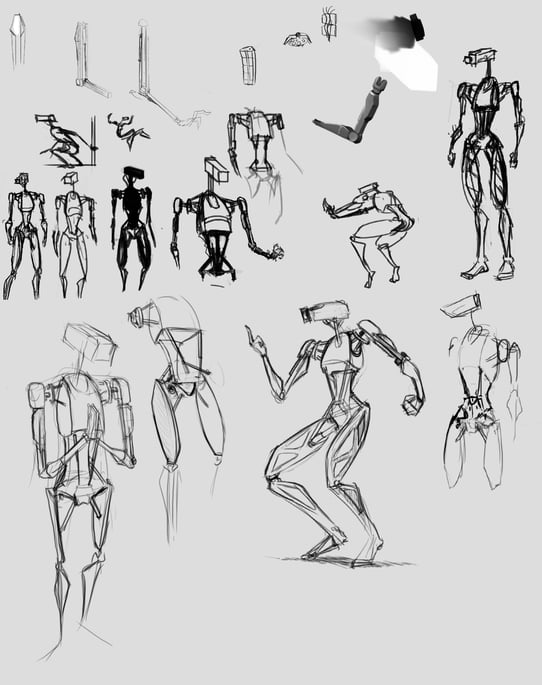 But how did the idea of Dot originate? The reason is a lot less romantic than you might think.

Øystein explains: “Originally we wanted this character to be used with live motion capture while using mocap suits such as Xsens and Noitom.”

But as the sketching progressed, the Pixotope team quickly realized that Dot is precisely the fun, slightly goofy character that is easy to feature in virtual productions, and even easier to love. 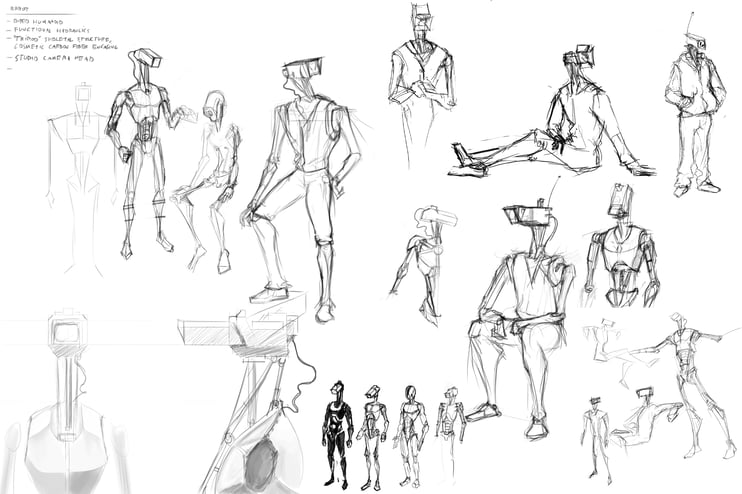 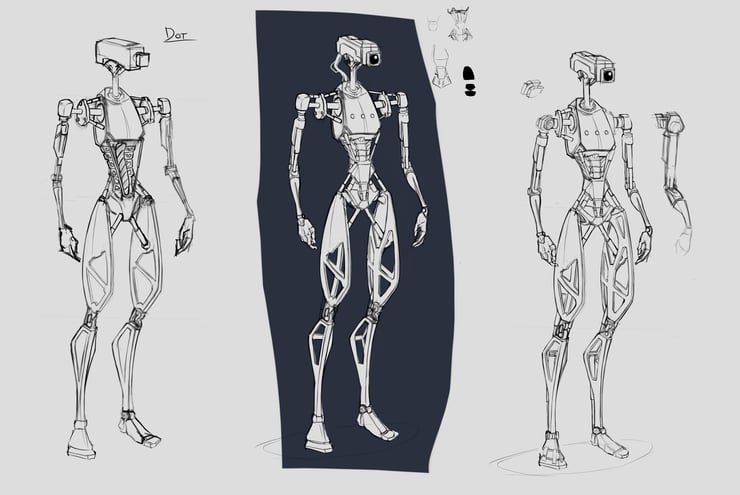 From paper to digital reality

Even though the initial sketches were made around October 2017, Dot was born alongside the launch of Pixotope in 2019, when Dot transformed from paper sketches into the sleek 3D robot character that we know today.  “The actual modeling was finished by early April 2019,” says Frank;  “if I had to pick a date when Dot was "born", I would say March 28th, 2019. That is when Dot got rigged, textured, and animated.” 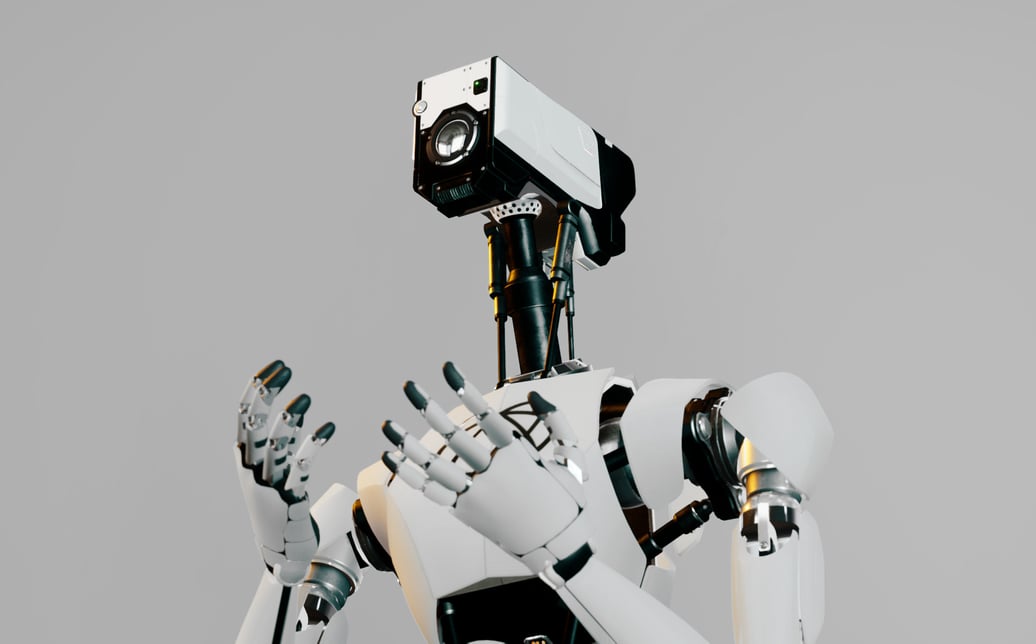 Co-creator Jonas Becsan still remembers the creative process as it happened just yesterday: “It was a lot of fun,” confesses Jonas, currently employed as a Senior 3D Artist at Norwegian startup Qispace.

“I really enjoyed working on the details on Dot’s head, the front side in particular with the lens, the panels with a lot of tiny screws, microchips, cooling fans, and other surfaces. The idea was to make his head somewhat look like a camera to echo the broadcast industry.” 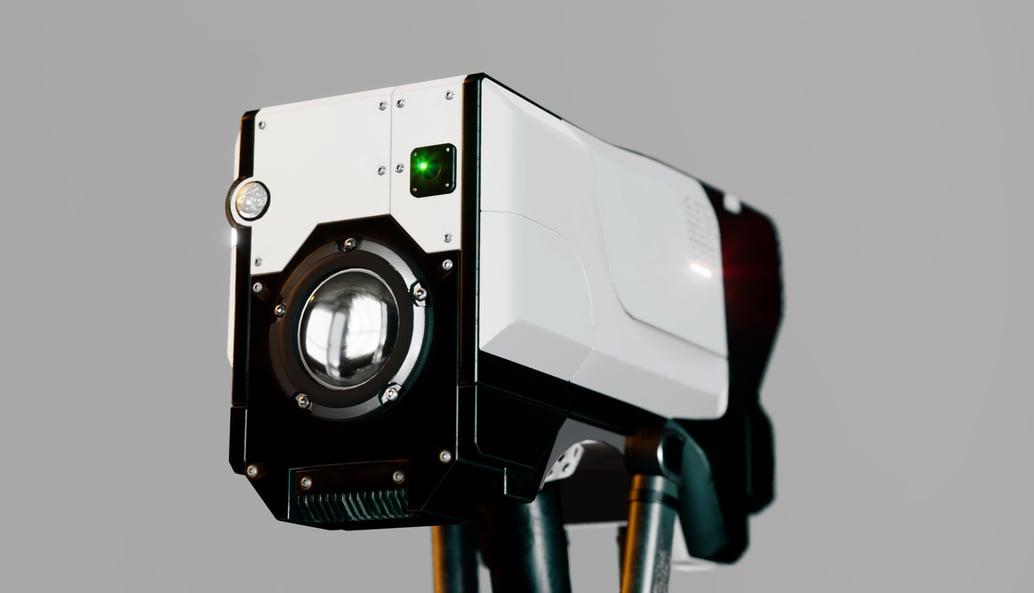 Unlike their other humanoid robots, Dot sees our world through somewhat different eyes. Jonas explains: “We provided Dot with a green laser pointer "eye" in the front. Some parts of his head were also made functional so that some panels could open up and reveal some LED light panels.“

The same level of detail went into Dot’s hands. After all, over the years, Dot perfected his royal wave in a way that could even guarantee him a spot on the Buckingham Palace balcony.

“The design was based on real human hands, and then split up into various mechanical parts with an inner metal skeleton and a shell outside it,” says Jonas. “For this, I took inspiration from the movie "Alita: Battle Angel”.

Born to be fun, not perfect

Instead of making Dot just another humanoid robot, the Pixotope team decided to go in another direction, mostly because Dot was lacking facial expressions.

“He is supposed to be a kind of goofy, nonchalant character, and avoid being offputting in his “roboticness,” explains Pixotope Product Specialist David Rodriguez, who brought Dot to life with animation and gifted Dot with funky moves.  “The reason why we did not opt for a robot was more of a technical limitation. We did not have facial motion capture at that time, and even though live humans look cool, especially metahumans, they still have a bit of uncanny valley strangeness. We wanted to make him more specific and turn him into a full metal character.” 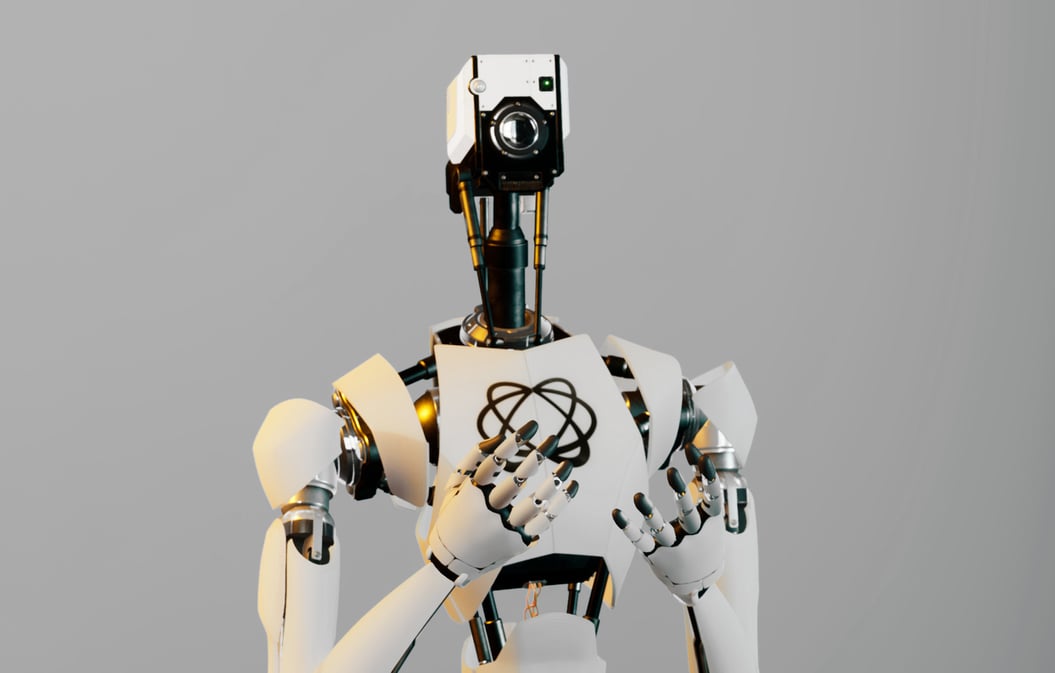 The Pixotope team hired a sound specialist to recreate the robotic sounds one might expect from Dot, in order to make him as realistic as possible and cement his character.

Øystein says: “We had a sound engineer come into our Oslo office and spend a few days creating the sounds of Dot’s metal steps, opening head, and chest panels, as well as  playing with a lightsaber.”

The name “Dot” was also carefully considered. Despite countless rumors of Dot being an acronym, the truth is somewhat different.  Øystein explains: “No, Dot is not an acronym. Before rebranding, our company was called The Future Group, and the logo used to have three dots, so we decided to name our mascot Dot after that.”

Just weeks later, Dot made his debut at the 2019 NAB show. David remembers: “Our NAB booth was a green screen with a two-camera setup, and we were doing a talk show every half an hour, showing what Pixotope can do. We used Dot’s character to do so. Frank was running a show while I was dressed in an Xsens bodysuit and driving Dot via live motion capture, so people could even give a high-five to Dot and interact with him.”

As you can imagine, Dot’s performance turned out to be a smashing success, and after their NAB debut in 2019, Dot’s friendly character became a staple of Pixotope branding. Indeed, Dot isn’t your typical 3D character, but rather a symbol of our talent and capabilities at Pixotope.