Pixotope Snapshot is our series shining a light on the many talented individuals that make the Pixotope team so great. This time we interviewed our camera tracking expert Rasmus Huxmann from our Cologne office.

Can you tell us a bit about your background leading to (TrackMen) Pixotope?

After school and civil service, I took up an apprenticeship and became an event technician because I wanted to do something ‘hands on’ instead of continuing theoretical learning.

After that experience, I felt that I would need something more challenging to keep me interested long-term, so I started studying media engineering which covers a wide range of topics in media production. My event technician education had a strong focus on video, so broadcast seemed to be a logical choice to me.

During my last semesters, I took on an internship at RTL studios in Cologne and had the great opportunity to help set up a mobile graphics system that was touring with football (soccer) championship qualification games and work as a technical “utility man” on the productions (a vaguely defined position later to be become known as “the Rasmus” among my successors).

During these productions, I had the chance to get to know TrackMen, who did the camera tracking for the graphics in the mobile studio and on the pitch. I was eager to learn more about that and I was super excited when I was told that they were looking for personnel! 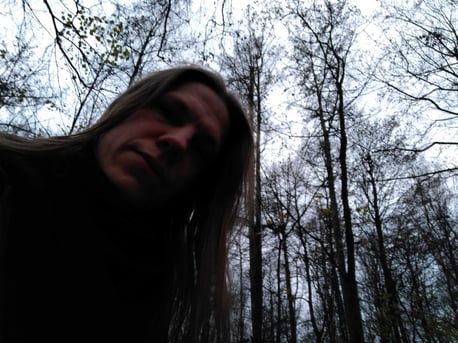 What piqued your interest in starting a career in the Virtual Production industry, specifically in camera tracking?

I studied at the Hochschule Düsseldorf and it had a virtual studio. One course, titled “Virtual Studio”  was the capstone course where I had to leverage everything that I had learned so far and bring it all together: audio and video technology, computer graphics, programming, and scripting. We actually had to make a small production in the studio, using all the hard- and software it was equipped with! The combination of virtual graphics with the real-world video elements created a number of really new challenges, in addition to all the known challenges and workflows that are usually involved in both of those creative processes.

Although people have been filming in studios for decades, computer graphics have also been around for longer than one might think. Though they have evolved a lot, mostly due to the increase in processing power of renderers. But however good they may become, their comparative lack of realism quickly becomes apparent when they are shown right next to, or rather within, the real world.

One key factor in achieving realism with graphics is to actually capture the details of the real world and video equipment and transfer it to the virtual world. While for example the virtual perspective can be programmed to do a perfect horizontal pan, the actual camera is going to be ever so slightly tilted and the lens will also distort the image to some extent. We can’t make the real recording perfect, so the virtual world has to be made slightly imperfect, to create an immersive composition. The interface between real and virtual here is the camera tracking! The camera defines what is captured in the real video, so it also needs to define what is in the virtual rendering.

The process of working with both worlds, studio equipment, renderings, and then going deep into the creation of virtual views while dealing with a variety of studios, stages, events, and their technical background, all with their own unique requirements, poses a number of creative and logistical challenges. Mastering the numerous facets of this workflow fascinated me and drove me to pursue a career that would enable me to do just that.

Your current role is Head of Customer Success. Can you tell us what your average day looks like?

This is actually my old job title and we are currently busy integrating into the now much larger and much more international Pixotope team, rearranging the whole structure to create workflows and management procedures to make sure technical support is both efficient and reliable. I have been leading the tracking support team in Cologne but we want all Customer Success members to be able to equally deal with graphics engines and tracking at the same time on a global scale. So this job description is likely to change to something more specific in the near future.
That said, my role took me from traveling to studios and events to mostly planning and coordinating projects from the office and providing support to our own staff from a central node. That means discussing all the technical details about jobs, from “what does the studio look like” down to “what is this connector on the camera lens” with customers, partners, and colleagues. As with tracking, the environment and equipment on site are vital for a smooth installation, and my experience in the business helps prepare for these jobs.

I am also the one leading the training on our tracking systems, for both our own staff and end-users that want to invest in a deep understanding. We invite them to come to our laboratory in Cologne to take a training course that empowers them with the knowledge to succeed and understand the technology at a deeper level.

In addition, there are always product demonstrations, testing, and R&D support needed in the lab, which keeps me busy, interested and up to date - it definitely helps ensure that the day-to-day doesn't get monotonous!

Your company TrackMen was acquired in April by Pixotope. What are your views about this collaboration creating such a complex product offering?

I consider this merger a great opportunity for both companies to create and develop an even greater product. For TrackMen, it greatly increases our reach and ability to support our customers. For Pixotope, it introduces a new product to their existing portfolio that makes for an awesome unique selling point.

For many customers, having a tracking system from one company and a graphics engine from another means they will have to contact two different sources for support. And for each party, the other system is pretty much a black box which they can only make assumptions about. As graphics and tracking are always interlinked to some extent, it slows everything down.

We can also develop cool applications in which we, for example, transfer the physical measurements of the studio by the tracking processes directly into the graphics scenes, making placements of graphics much easier and rendering studio scans of third parties obsolete. Ultimately this makes the interfacing between real and virtual spaces more direct.

For me personally, it’s another step up in keeping everything interesting, learning new things, and seeing new applications. So far, we have only been able to learn the very basics of graphics engines and only the parts related to camera tracking. This is a great chance to expand my knowledge and understanding from an extremely specialized aspect of virtual studios to a bigger picture.

There are countless camera tracking projects that TrackMen did for well-known clients: Are there any projects you are most proud of?

For me, mastering the challenges of new applications and big shows has always been the most exciting. Camera tracking tends to be overlooked and managing the many factors that play a role in getting a good tracking are not easy to see and understand. The efforts made on the graphics side, which show in the actual video in bright colors, are more obvious. But I have always been proud of the fact that I can use my skills to problem-solve in a way that few people are able to. It’s the small details that ultimately make the difference in the final product. Working in camera tracking, you end up cultivating a very unique skill set that is all but common, which is pretty cool.

Working on a show such as the Eurovision Song Contest, with millions of viewers and a huge lift on the technological and artistic sides, is of course very exciting. What is interesting though, is that quite a lot of ambitious and technologically advanced events are actually company presentations, such as car shows and model releases.

Frequently, the creative people behind these showcases have more innovative ideas and use virtual graphics in a less conservative way than broadcasting. The car on stage has to be a real object - its existence is what the show is about after all - but they may be overlaid with explanatory graphics or even placed in a completely virtual environment that moves around them, to create the effect as if they were driving through surrealistic landscapes. These shows may have less viewers but are maybe even more exciting to work on.

What do you love about working at Pixotope?

Apart from the technical stuff, I like the colleagues and the working atmosphere which makes work enjoyable. Everyone seems to have real ambition to make cool things happen and is always willing to help each other. I feel like I can talk to everyone openly about workflows and potential concerns.

It’s also a young company, in terms of both the age of the business and the people employed there. The good thing about this is, that few things are fixed too firmly. Everything can be discussed, and new ideas and concepts can be brought up and will be considered seriously. That is true for both workflows and technology.

What excites you about the future of the broadcast and virtual production industry?

I think that virtual production is constantly improving and there has been some great progress made in quality lately. It still feels far from being “plug and play” in many aspects, but that’s why I have my job after all.

In recent years, we have seen improvements in quality, like defocus and raytracing, which greatly enhance immersion. These are not new ideas, frankly speaking, and the concepts have been around for longer than one might think, but processing power is currently making visuals possible that could not be rendered in real-time ever before. I am excited to see where this is going as I think we are currently seeing a transition from the “hard set replacement and infographics” concept of virtual production to a more artistic and creative one that really places actors, objects, and studios in enhanced environments that can look realistic or artistic, depending on the desired effect. I’d like to see more new ideas for applications than just the conservative ones and I think the means to go there are getting better rapidly.

Outside of work, how do you enjoy spending your free time?

I have two kids, a boy and a girl, the older one just recently having started school. So obviously, I spend most of my free time with them - and that is my favorite way to spend my time.
I also love music. I don’t currently produce any of my own but I listen to a variety of music as much as I can and I actually think that almost any moment passed without music is hardly a good moment.
I also like drawing, even though I do not consider myself much of an artist, I create pictures for family and close friends every now and then, like for my nephew who loves dragons. I have never turned it into anything more than a hobby, as I would much rather create what I like, even though it may seem funny or crazy at times. Maybe that’s why I became more of a technician than a creative worker.